The 150th anniversary of Alice in Wonderland celebrated through stamps

The 150th anniversary of Alice in Wonderland celebrated through stamps

Earlier this year the Royal Mail marked the 150th anniversary of the famous book Alice in Wonderland with a beautifully illustrated set of 10 stamps. 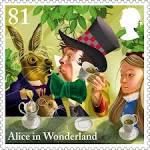 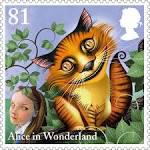 Anybody who has read the book or seen the various film depictions of it will be familiar with its famous characters such as The White Rabbit, the Mad Hatter, the Cheshire Cat and of course, Alice herself all of which are depicted on these commemorative stamps. Illustrated by artist Graham-Baker Smith, the stamps feature famous scenes from the book such as the Mad Hatter’s tea party and Alice falling down the rabbit hole.

Alice’s Adventures in Wonderland, which is a landmark in the history of children’s literature and one of the strangest and most enduring stories ever created, was written by Reverend Charles Lutwidge Dodgson under the pseudonym of Lewis Carroll. At the time the Reverend was a young Mathematics don at Christ Church College in Oxford and he made the story up to entertain children on a boat trip. One of these children was the daughter of the Dean of the college, Alice Liddell. Alice was so taken with the story that she requested the Reverend to write it down and in 1864 he did so, presenting the book to Alice as a Christmas gift complete with his own illustrations.

The Reverend then developed the story further and published hit under his pen name of Lewis Carroll in 1865. The book was an immediate success and this then spawned the sequel Alice Through the Looking Glass.

150 years later this famous story has been depicted in numerous stage, film and animation adaptations and is probably one of the most famous children’s books ever written. Now depicted on a set of beautifully illustrated stamps they are sure to be highly collected and sought after by lovers of the book and stamp collectors in general.