If you’re a stamp collector then you’re certainly in good company. Over the years there have been many famous collectors and it still holds a fascination for some celebrities today.

Here’s a list of just some of the famous collectors from the past and now: 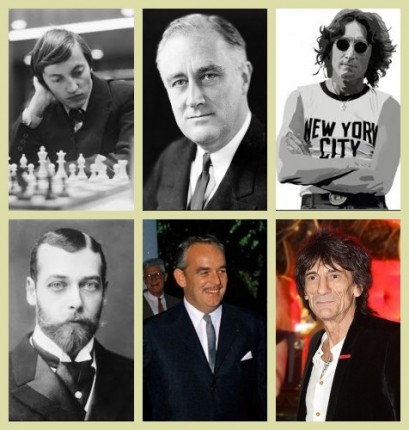 King George V – A huge collector of stamps and amassed one of the greatest collections in England during his reign.

Prince Rainer III of Monaco – An avid collector of Monegasque stamps (stamps originating from Monaco) and owner of the most valuable stamp from Monaco – the 5fr stamp of Charles III.

Franklin D. Roosevelt – Became interested in stamps when he was stricken with polio and amassed a fine collection. He also designed many stamps for the US Postal Service.

John Lennon – Collected stamps when he was a boy. The collection was later bought by the Smithsonian Postal Museum in the United States for $53,000 in 2005.

Freddie Mercury – Started collecting stamps when he was 12 and the collection was later bought by the Royal Mail with the proceeds going to an AIDS charity.

Ronnie Wood – Member of the Rolling Stones and an avid stamp collector who collects rare stamps.

Maris Sharapova – A top 10 tennis player and keen collector of stamps who takes the opportunity during international tournaments to collect stamps from the various countries she visits.

It’s fascinating to think that since the issue of the Penny Black, the first pre-paid postage stamp in 1840, people have collected rare stamps. It is still regarded as one of the world’s most popular hobbies and it’s a hobby that is shared from all four corners of the world and from all sections of society – from a child just starting their collection to rich and famous entertainers, politicians and sports personalities.