Celebrating the 175th anniversary of the Penny Red stamp

Celebrating the 175th anniversary of the Penny Red stamp

The Penny Red Stamp is one of the most famous stamps in the world. In order to learn more about this stamp we must focus on the history of the Penny Black stamp and how this led to the Penny Red being created.

The first Penny Black stamp was available in the Post Office on May 6th, 1840. This stamp could be cancelled at any post office where the letter was posted with the help of a Maltese cross (which was actually a type of obliterating stamp) form of cancellation. To do this, workers had to use ink based on a red colour so that everyone knew that the stamp couldn’t be used again. The post office workers even got instructions about how to prepare the red ink. They had to mix 1 lb of printer’s red ink, one pint of linseed oil and 0.5 pint of sweet oil’s dropping. The instructions were sent to all post offices on April 25th, 1840. 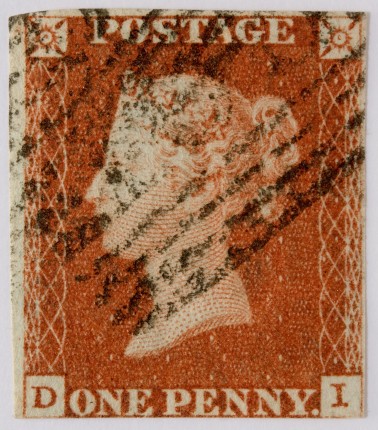 Even though the idea seemed sound in the beginning, there were many experts who claimed that this method was not effective and that people could easily remove the red ink from the Penny Black stamp and use the stamps again. The authorities took these claims seriously, so they decided to take measures that would stop the cleaning of stamps and their illegal use. For this purpose, the Post Office issued different stamps with combinations of colours in order to check the ink cancellation efficiency. After a while, they decided that a stamp printed in red-brown colour and black ink cancellation was the best way forward. So, starting from December, 1840, people could get the red-brown version of the stamp.

The Penny Red stamp succeeded the famous Penny Black stamp and it became the most commonly used stamp in the United Kingdom for about 38 years. During this time there were several small changes to the design but the general consensus of opinion was that replacing the Penny Black with the Penny Red was the right thing to do.

The original version of the Penny Red stamp didn’t have perforations and workers used scissors to cur them from the sheet (just like they did for the Penny Black stamp). Perforations became available in 1850 and were implemented in 1854. Starting from 1855, the perforation size was switched from 16 to 14 because the sheets separated easily. These unique stamps were printed in sheets that contained 240 stamps, 20 rows, 12 stamps to each row. One sheet cost one pound and one row – 1 shilling. It is interesting that these dimensions were used for more than 100 years until 1971 when the size was reduced to 200 stamps per sheet.

As you can see, the Penny Red stamp has a long history and this year we are celebrating the 175th anniversary of its release. Keep your eyes peeled at our stamp auctions and you might just see a few being sold!