The 1840 2d blue was the world’s second official postage stamp, issued two days after the 1d black. It was first sold to the public on 8th May even though it was originally intended that this stamp would be issued simultaneously with the 1d black. The 1840 issue was printed from two plates, Plate 1 and 2, of which we have some nice examples in our February auction like this Plate 1 unused stamp (lot number 453): 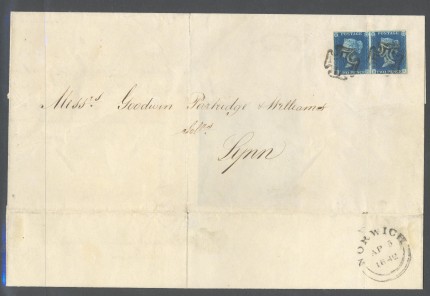 1d blacks were meant for letters and parcels weighing up to half an ounce and 2d blues for everything heavier than that. A lot less post was sent that way, which is why the 2d blue was printed in considerably lower numbers than the 1d black. Because fewer stamps were printed, 2ds are actually worth more now than 1d blacks!

Another 2d blue was issued in 1841 but these are far more common than their 1840 counterparts. You can easily spot the difference between the two as the 1841 2d has white lines underneath the ‘POSTAGE’ and above ‘TWO PENCE’ parts of the stamp. For an example (lot 469):