In an age when sentimental declarations can be easily sent with the click of a button, there is something truly meaningful about receiving a thoughtful card or a loving letter through the post. 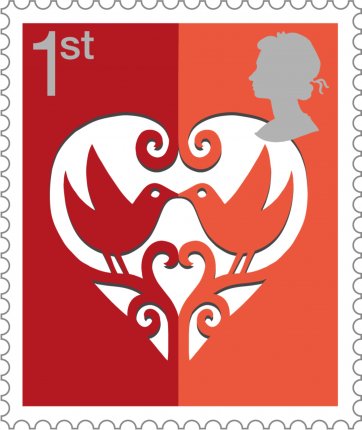 Thankfully, the designers at Royal Mail are no strangers to creating Valentine’s Day postage stamps to help the rest of us observe February, a month that’s dedicated to all things love, hearts and romance.

Say it with stamps

From artistic and abstract representations of love to scenes lifted straight from the pages of literature, stamps have long been used to celebrate romance in all its forms.

Over the years, special stamps have been issued to commemorate the life of Saint Valentine, a third-century Roman martyr who was executed on February 14 – reputedly because he officiated over secret marriages. To this day, the date is recognised as the Feast of Saint Valentine in honour of the patron saint of lovers.

Jane Austen is of the nation’s most celebrated authors and wrote stories of love that have stood the test of time.

To mark the 200th anniversary of the publication of ‘Pride and Prejudice’, Royal Mail issued a set of stamps which featured illustrations from her novels.

With artwork from Angela Barrett, two first class stamps showed scenes from ‘Pride and Prejudice’ and ‘Sense and Sensibility’. Depictions from her other works – ‘Mansfield Park’, ‘Emma’, ‘Northanger Abbey’ and ‘Persuasion’ – made up the six-stamp collection.

Royal weddings have always been a source of inspiration and cause for collective celebration, which is why Royal Mail designers choose to honour these nationally important (but also deeply romantic) occasions.

Special stamps were released when Prince William and Kate Middleton got married in 2011, while Prince Harry and Meghan Markle followed with their own collection after the couple married in 2018. And there will be plenty more to come…

Adding to your lovable stamp collection

At Tony Lester Auctions we handle sales and purchases for many budding stamp collectors, enthusiasts or dealers. You can talk to us about advice during one of our auctions throughout 2019.

Our next stamp auction will be held on April 14. For more information about timings and auction items, please get in touch by sending us an email or call the team on 01926 270107.