A stamp mosaic consisting of over 528,000 stamps has recently entered the Guinness Book of World records for being the biggest ever created. On the 9th March, stamp enthusiast Peter Boyd, took part in a very special art project held at the Southern England stamp show in Farnborough, Hampshire. He put the finishing touches to a stamp mosaic that has been nearly 10 years in the making.

Measuring an extraordinary 27 metres by 9 metres and made up from a total of 528,220 Machin stamps, Peter got the idea after studying a 6 and 1/2p Machin stamp through a magnifier. After noticing that the image was made up from a series of small dots he decided that a giant mosaic could be created by using thousands of Machin stamps. Peter reached this conclusion after he scanned the Machin stamp to the highest magnification he could achieve and then he set about the task of creating a huge mosaic template and started the project.

The previous world record for a stamp mosaic was held by a man in Spain and Peter was determined to beat it. And after nearly 10 years of piecing it all together, the record attempt was made on the 9th March and the entire mosaic was laid out on the floor of the Farnborough Leisure Centre, one day before the Southern England Stamp show.

Of course, we are pleased to report that Peter beat the record and he will now be proudly recorded in the Guinness Book of World Records. After the record had been beat, Peter had to dismantle the mosaic because there was no room for the stamp dealer tables to be put up for the stamp show! Although this must have been a little bit disheartening, we’re sure that Pater must have enjoyed being a record-breaker and, for posterity, special photograph souvenirs of the mosaic were taken and then sold at the show for the charity, Childline. 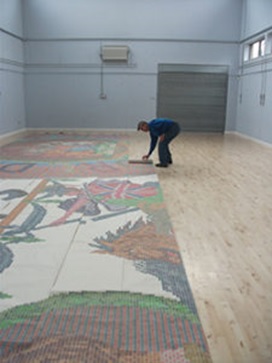 Congratulations Peter. You can now take your rightful place with a long list of British eccentrics who have broken Guinness World Records over the years!