The world’s first adhesive postage stamp was issued in Britain on May 6th 1840, which is the now world-famous penny black. First Day Covers with the stamps are incredibly rare but we are fortunate to be auctioning one in our February 23rd auction, a picture of which is below. 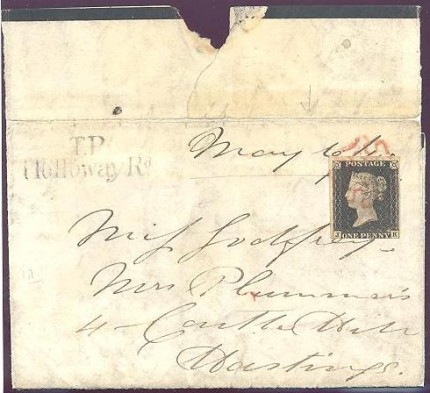 These stamps were issued from 11 plates and penny stamps from Plate 11 are the rarest ones as they were printed in the smallest quantities. This was because this plate was originally only intended for the printing of penny reds, a new stamp which was issued in 1841. The design of these new penny reds meant that penny blacks were only actually issued for one year. Penny blacks are usually found cancelled with the so-called Maltese Cross cancellations, either in red or in black. The stamps were issued in sheets of 240 and 283,992 sheets were issued in total, meaning that 68,158,080 stamps were issued, not even counting the sheets that were spoilt in printing and then destroyed! These did not come perforated as modern stamps are but had to be cut with scissors by hand. This is why the margins and size of each of these stamps differs so much. And the size of these margins matters a lot in determining the modern value of these stamps.

In contrast to what most people think, penny blacks aren’t actually that rare or scarce and you can buy one for as little as £10! As with all stamps, condition is of the highest importance in determining the value of each penny black. A penny with a nice clean cancel and large margins will be worth a lot more than one which has a smudged cancel and is badly cut into. You can see an example of both below. The stamp on the left has a grubby cancel which covers most of the stamp and the margins are closely cut, nicked, and damaged. The other two show clean, neat strikes of the Maltese Cross and good margins all round, with the one in the middle having especially large margins. You can just make out a part of a letter from an inscription, which shows that this stamp came from the edge of a sheet, making it much easier to have larger margins. The stamps in the middle and on the left are far more valuable than the one on the left. Something which I’m sure Victorian Postmasters never even considered when they were cutting these stamps!